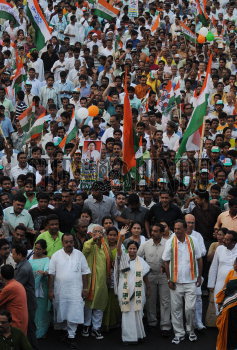 Caption : KOLKATA, 03/04/2011: Chief of All India Trinamool Congress (AITC), Mamata Banerjee during her election campaign with a mamoth "Padayatra" at Dhakuria with the AITC nominated candidates for forthcoming assembly election in Kolkata on April 03, 2011. Photo: Arunangsu Roy Chowdhury