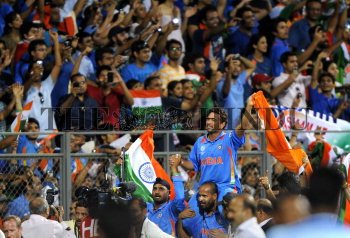 Caption : Mumbai : 02/04/2011: India's Sachin Tendulkar waves the National flag during the victory lap as he is being carried by teammate Yusuf Pathan on his shoulders as part of the celebration after India's victory over Sri Lanka in the final of the ICC Cricket World Cup 2011 at the Wankhede Stadium in Mumbai on April 02, 2011. Photo: K.R. Deepak