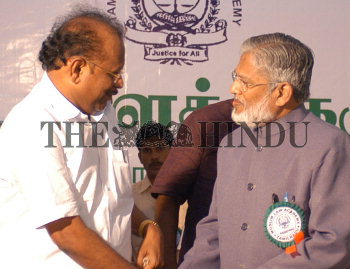 Caption : TIRUCHI, 05/05/2007: Former Judge of the Madras High Court, Justice Akbar Basha Kadri exchanging greetings with the Union Minister of State for Home, S. Regupathi (left), at a seminar on ''Muslim Law'', in Pudukottai on May 05, 2007. Photo: M. Moorthy