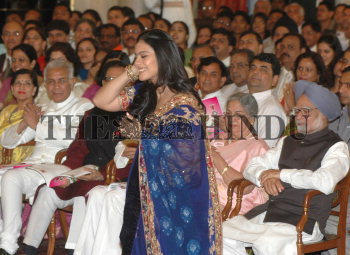 Caption : NEW DELHI, 01/04/2011: Film Actor, Kajol Devgan on her way to receive Padma Shri Award from President Pratibha Patil during the Padma Awards 2011 presentation ceremony at Rashtrapati Bhavan in New Delhi on April 1, 2011. Prime Minister Manohan Singh along with other dignitaries are also seen in the picture. Photo: Rajeev Bhatt