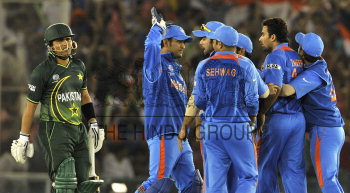 Caption : Mohali, 30/03/2011: India's Zaheer Khan (second from right) celebrates with teammates on getting Kamran Akmal's wicket during the ICC Cricket World Cup 2011 semifinal match between India and Pakistan at the PCA Stadium in Mohali on March 30, 2011. Photo: S. Subramanium