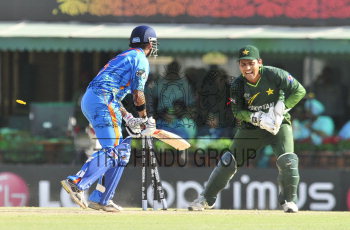 Caption : MOHALI, 30/03/2011: India's Gautam Gambhir is stumped by Pakistan wicketkeeper Kamran Akmal off the bowling of Mohammad Hafeez during the ICC Cricket World Cup 2011 semifinal match between India and Pakistan at the PCA Stadium in Mohali on March 30, 2011. Photo: Akhilesh Kumar