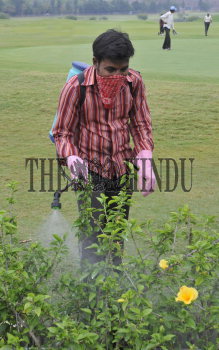 Caption : HYDERABAD (AP) --28-03-2011 -- (BL/AGRI-BIZ PAGES ) -A farm worker sprays 'malathian ' over a lawn in Hyderabad on Monday . Exposure to pesticides both occupationally and environmentally are causing a range of human health problems. It is estimated that nearly 10,000 deaths annually to use of chemical pesticide worldwide, with about three-fourths of these occurring in developing countries. At present, India is the largest producer of pesticides in Asia and ranks twelfth in the world for the use of pesticides with an annual production of 90,000 tonnes. A vast majority of the population in India (56.7 percent) are engaged in agriculture and are therefore exposed to the pesticides used in agriculture. PHOTO: P_V_SIVAKUMAR .