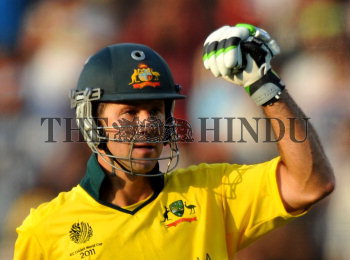 Caption : Ahmedabad: 24/03/2011: Australian captain Ricky Ponting celebrates after scoring a century in the second quarter-final match of the ICC Cricket World Cup 2011 between India and Australia at the Sardar Patel Stadium, Motera, in Ahmedabad on March 24, 2011. Photo: K.R. Deepak