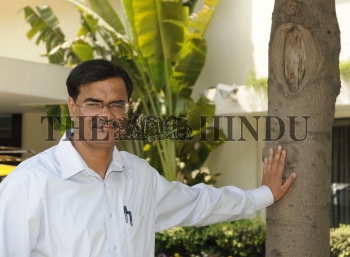 Caption : NEW DELHI, 24/03/11: ELEPHANT TASK FORCE:The elephant can be a symbol of a larger Meta shift in human-Nature relationship. Any such journey begins with small steps, but it also needs joining of hands, hearts and minds,? says environment historian Mahesh Rangarajan who headed the Elephant Task Force constituted by the Ministry of Environment and Forests in February 2010. The Task Force submitted its report, ?Gajah: Securing the Future for Elephants in India', in August 2010. Historian and Environmentalist Mahesh Rangarajan during an interaction with the media on April 16, 2011. Photo:VV.Krishnan