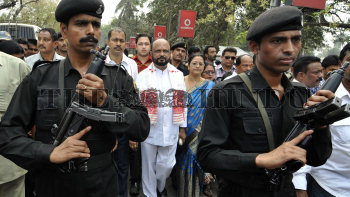 Caption : NAGAON?24-03-2011: Former Assam Chief Minister Prafulla Kumar Mahanta (in white) along with his wife Jayashree Mahanta and supporters on his way to deputy commissioner?s office to file his nomination papers in Nagaon district of Assam about 120km away from Guwahati city on March 24, 2011. Asom Gana Parishad (AGP) candidate P.K.Mahanta filed his nominations from Barhampur and Samuguri constituencies for the forth coming Assam State Assembly election. As only one more days left to file the nomination papers for the second phase of state assembly election, candidates all over the state are seen busy filing their nomination papers these days. All total 1,81,56781 corer votes will exercise their frenzies in 23,813 polling stations during the Assam State Assembly election scheduled to be held on April 4th and 11th, 2011. PHOTO: RITU_RAJ_KONWAR