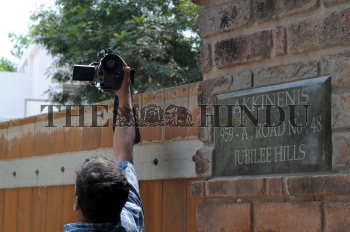 IT RAIDS IN FILM ACTRESS HOUSE

Caption : HYDERABAD, 23/03/2011: Income Tax officals carrying out IT raids simultaneously in all the Houses, Offices and Properties acquired by the film actors Nagarjuna, Ravi Teja, Anushka Shetty and Producer D.Shiva Prasad Reddy in Hyderabad on March 23, 2011. Media shooting the IT raids carried out by the IT officials at Akkinenis House from outside. Photo:Mohammed Yousuf