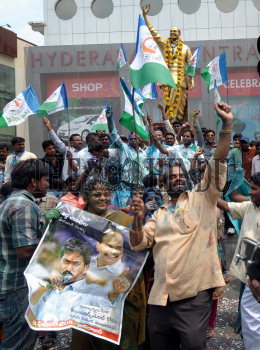 Caption : HYDERABAD, 23/03/2011: Pro-Jagan camp seen in upbeat mood: Activists of YSR Congress Party celebrating victory of their candidates in the Andhra Pradesh Legislative Council Election for the Local Authorities, by distributing sweets in front of Y.S. Rajasekhara Reddy Statue in Hyderabad on March 23, 2011. In a setback to the ruling Congress, rebel leaders YS. Jaganmohan Reddy's defeated the ruling party candidates and takes lead in winning three out of nine seats. Photo:Mohammed Yousuf