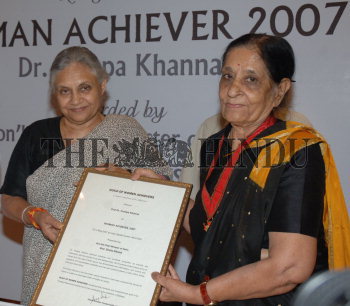 Caption : NEW DELHI, 02/05/2007: On behalf of the Guild of Women Achievers, Chief Minister Sheila Dikshit honours Dr. Pushpa Khanna as 'Woman Achiever 2007' for discovering a unique anti-diabetes drug based on an oil extract from the seeds of bitter gourd, in New Delhi on May 02, 2007. Photo: V.V. Krishnan