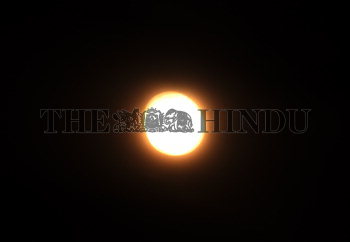 Caption : TUTICORIN, 19/03/2011: SUPER MOON: The moon will be the closest it has been to the Earth in 18 years. It will also be at its fullest ,A scene in Tuticorin on March 19, 2011.The phenomenon, called lunar perigee or Supermoon, happens when the moon reaches its absolute closest point to Earth.A full moon of rare size and beauty will rise in the east at sunset called super "perigee moon", the biggest in 20 years, according to scientists. Photo : N.Rajesh