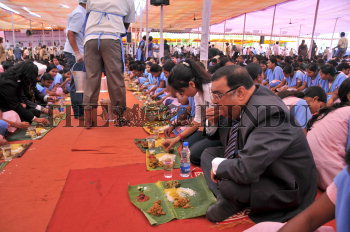 Caption : BHUBANESWAR, 19/03/2011: Justice Altamas Kabir of Supreme Court of India and Executive Chairman of National Legal Services Authority (NALSA) is having lunch along with 12,000 tribal children as he committed in his earlier visit in Kalinga Institute of Social Sciences. More than 250 legal luminaries from different parts of the country were also present when National Legal Services Authority has declared 2011 as the year of Protection of Child Rights in outskirt of Bhubaneswar on March 19, 2011. Photo: Ashoke Chakrabarty