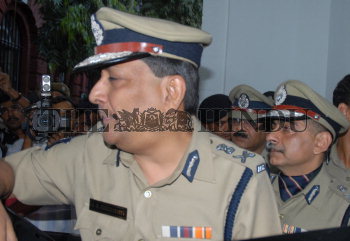 Caption : KOLKATA, 17/03/2011:Gautam Mohan Chakrabarti, former COMMISSIONER of Police of Kolkata leave the Headquarters of the City Police on March 17, 2011, accompanied by R.K. Pachnanda,( right) the newly appointed Police COMMISSIONER.The transfer of Chakrabarti, who had served as the Police COMMISSIONER for the last three years, was sought by the Election Comiission ahead of the West Bengal Assembly Polls. Photo: Sushanta Patronobish