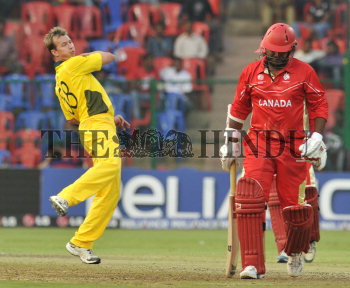 Caption : Bangalore: 16/03/2011. Australia's Brett Lee celebrates after taking the wicket of Balaji Rao of Canada in the Group A match of the ICC Cricket World Cup 2011 at the M. Chinnaswamy Stadium in Bangalore on March 16, 2011. Photo: K. Bhagya Prakash