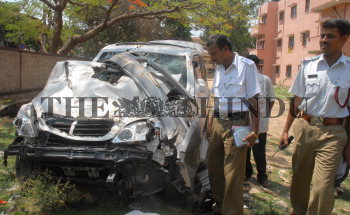 Caption : BANGALORE, 28/04/2007: Mangled bullet proof Hyundai Terracan car, which was supposed to pick up Andra Pradesh Chief Minister Y. S. Rajasekhara Reddy's son, Jagan Mohan Reddy met with an accident, head on COLLISION with another car on its way to Airport, in Bangalore on April 28, 2007. The occupants of the car were injured. Photo: K. Gopinathan