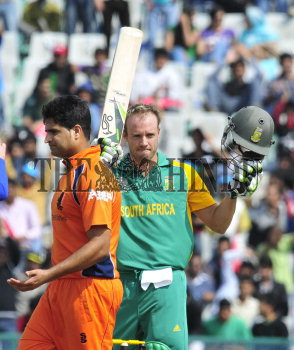 Caption : MOHALI: South African batsman AB de Villiers, who scored a magnificent 134 runs out of 98 deliveries with the help of four sixes and thirteen fours, acknowledge a standing ovation from the dressing room after completing his century while opponent pacer Mudassar Bukhary walks past during ICC World Cup group B league match played between South Africa and The Netherlands at PCA stadium in Mohali on March 03, 2011. Photo: Akhilesh_Kumar