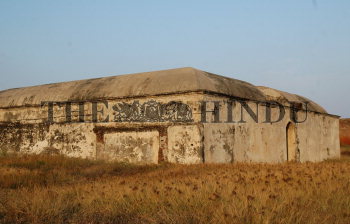 Caption : KANCHEEPURAM, 24/02/2009: SADRAS FORT: A view of Dutch Fort at Sadras near Kalpakkam, Kancheepuram district on March 02, 2011.It looks ordinary today, but it is at this point that severe battles took place between the British and the Dutch 175-200 years ago. The vestige of such a past is the 350-year-old Sadras Fort. At present, it is under the custody of the Archaeological Survey of India (ASI), which carried out a substantial amount of conservation work there in recent years.Sadras in Tamil, it is called Sadurangapattinam is a classic example of an Indian village. Once upon a time, this area was famous for muslin cloth, which attracted the Dutch, who made it their colony in 1647. The Dutch East Indian Company set up a factory essentially to trade in the commodity.