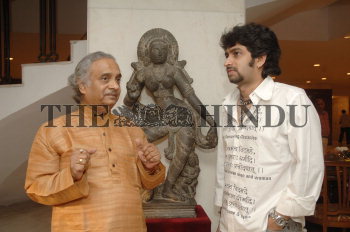 Caption : NEW DELHI, 27/04/2007: Singers Abhijit Pohankar (left) and his father Pandit Ajay Pohankar during an interaction in New Delhi, on April 27, 2007. Abhijit is to release a music album 'Urban Raga' composed by him. Photo: V. Sudershan