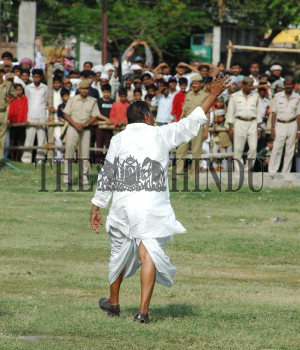 MULAYAM SINGH YADAV WAVES TO HIS SUPPORTERS IN VAR

Caption : Varanasi: 27/04/2007: In a hurry: Samajwadi Party chief and U. P. Chief Minister Mulayam Singh Yadav waves to his supporters before boarding on helicopter after addressing an election meeting in Varanasi on April 27, 2007. Photo: Akhilesh Kumar