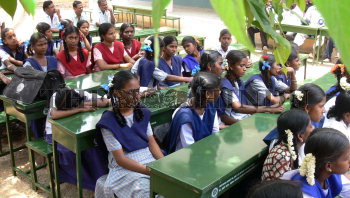 Caption : VELLORE, 22/04/2007: Students sitting on the new benches donated by the Rotary Clubs in R.I. District 3230 to various Government Schools in five northern districts under its `Schools into Smiles' Project ,at a function got up at the Government Girls Higher Secondary School, in Walajapet on April 22, 2007. Photo: D. Gopalakrishnan