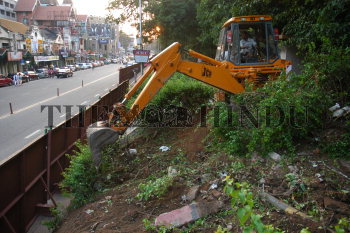 Caption : BANGALORE: 25/04/2007: A JCB machine uprooted the beautiful bougainvilla plants from the most part of the magnificent slope of the M.G. Road promenade in Bangalore on April 25, 2007 even as the metro rail work is expected to gather pace. The barricade separating the work area was also being extended to provide for hassle-free movement of men and machines. The entry to the promenade from Kumble circle was banned by putting a temporary barricade. Those who managed get on to the promenade found that the pathway was uneven and hardly walker-friendly. The movement of JCB has led to dismantling of tiles of the walkway. Photo: K. Murali Kumar