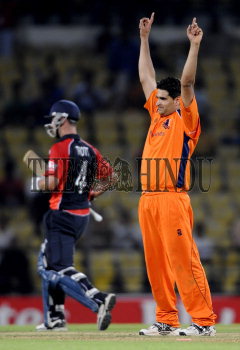 Caption : Nagpur: 22/02/2011: The Netherlands bowler Mudassar Bukhari celebrates after taking the wicket of England batsman Andrew Strauss (not in pic) during their match in the ICC Cricket World Cup 2011 at the Vidarbha Cricket Association Stadium in Nagpur on February 22, 2011. Photo: K.R. Deepak