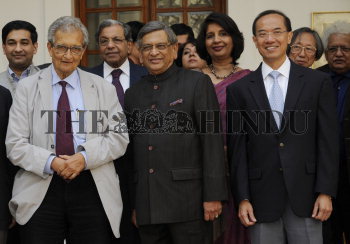 Caption : NEW DELHI, 21/02/11: NALANDA MENTOR GROUP:EXTERNAL AFFAIRS MINISTER SM. Krishna flanked by Nalanda Mentor Group headed by Nobel Laureate Amartya Sen and Foreign AFFAIRS MINISTER of Singapore George Yeo along with NK.Singh, Nirupama Rao, Lord Meghnad Desai and other Members of the group prior to a meeting at Hyderabad House, examined and recommended the framework and structure of International Co-operation and Partnership Governing the Establishment of Nalanda University (NU) that would facilitate continued International support and engagement to initiate funding arrangements in New Delhi, on February 21, 2011. Photo: V.V.Krishnan