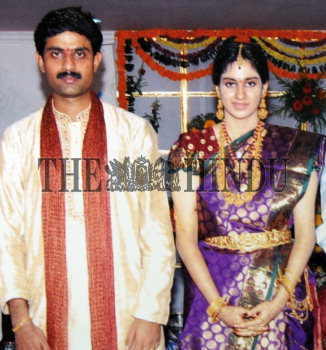 Caption : HYDERABAD, 17/02/2011:Orissa?s district Collector of Malkangiri R. Veenel Krishna who was abducted by Maoists, showing a snap to journalists in Hyderabad on Thursday. In perhaps the first-ever abduction of an Indian Administrative Service officer by the Maoists in Orissa state, the who has been kidnapped by the Maoists remained untraced even as the state authorities launched "back channel" efforts to seek the release of the IAS officer from the custody of the Naxalites. Photo: Mohammed Yousuf