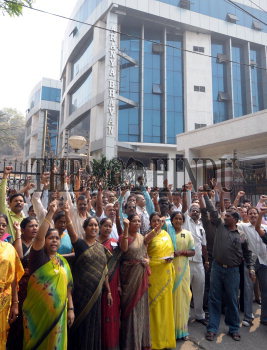 Caption : HYDERABAD,17/02/2011:TELANGANA ISSUE: State Government Employees of TELANGANA protagonists shouting slogans on first day of their non-cooperation movement launched in Hyderbad to mount pressure on the State and Central Governments to grant Statehood to TELANGANA on February 17, 2011. Administration came to standstill as more than two lakh Government Employees join hands with TELANGANA Joint Action Committee to stage a indefinite protest till introduction of a bill in Parliament for a Separate State of TELANGANA. Photo:Mohammed Yousuf