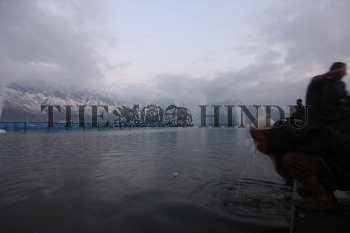 Caption : SRINAGAR, 15/02/2011: Kashmiri Muslim devotees washing faces before in night prayers at the Hazratbal shrine on the shore of Dal Lake in Srinagar on Feburay 15, 2011 on the occasion of Eid Milad-un Nabi, marking the birth anniversary of Prophet Mohammad. Thousands of Kashmiri Muslims gathered at the shrine, which houses a relic believed to be a hair from the beard of Prophet Mohammad. Photo: Nissar Ahmad