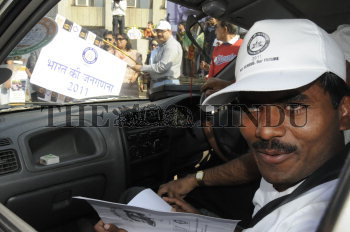 Caption : BHOPAL, 13/02/2011: CENSUS OPERATIONS 2011:A Visually challenged navigator sharing braille script rout plan to his driver during the 'Census Car Rally for the blind' in Bhopal on February 13, 2011. The rally being organized by the directorate of Census with the support of an NGO Arushi, to create an awareness for the ongoing second phase of Census-2011. Photo: AM.Faruqui