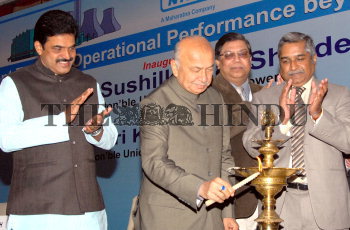 Caption : B:LINE: Sushilkumar Shinde, Union Minister of Power lighting the lamp during the inauguration of the Indian Power Stations-2011 (A Power Plant O&M Event of NTPC). along with (L to R ) K.C. Venugopal, Minister of State for Power , Mr. Arup Roy Choudhury ,CMD,NTPC, and Mr. P. Uma Shankar Secretary Ministery of Power in the Capital on .13.2.11. Photo: Kamal Narang