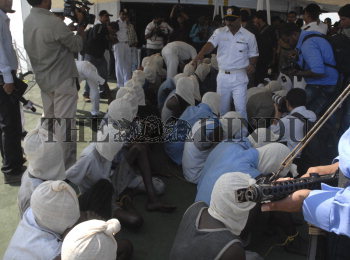 Caption : MUMBAI, 10/02/2011: Somali pirates sit ONBOARD in Coast Guard Ship Samar on February 10, 2011. Along with the 28 pirates, 24 Thai and Myanmarese hostage crew were rescued by Coast Guard and Indian Navy on February 06, 2011, during anti-piracy operations off Lakshadweep Island. Photo:Vivek Bendre