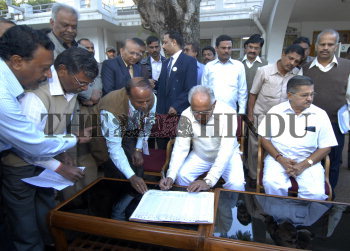 Caption : BANGALORE, 09/02/2011: CENSUS OPERATIONS 2011: Census official along with BBMP commissioner, who went to Chief Minister B.S.Yeddyurappa's resident early morning on race cource road in Bangalore, kick started the cencus programme of that locality from his place. Census 2011 is set to begin from February 09, 2011. Census 2011 will be the 15th national census of the country. The government has also decided to prepare a National Population Register (NPR). Spread across 35 states and Union territories, the census would cover 640 districts, 5,767 tehsils, 7,742 towns, and more than 6 lakh villages. More than 24 crore households will be visited during this exercise. To carry out this massive exercise, over 27 lakh people have been engaged. Photo: K. Gopinathan