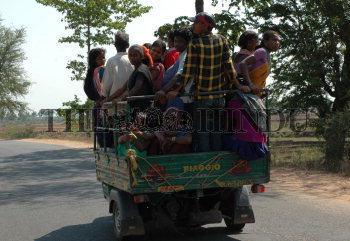 Caption : BHUBANESWAR, 21/04/2007: Migrated labourers from neighbouring states are moving in a risky way to their site by squeezing themselves in an auto in Bhubaneswar on April 21, 2007.. Photo: Ashoke Chakrabarty