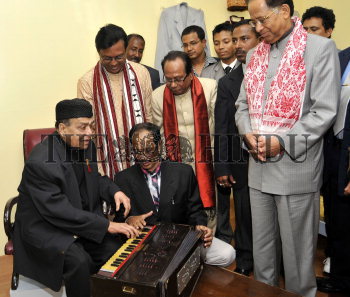 Caption : GUWAHATI, 25/01/2011: Dr. Bhupen Hazarika playing his old harmonium as Assam Chief Minister Tarun Gogoi (R) and other dignitaries look on during the inaugurating of the ?Dr Bhupen Hazarika Museum? at Srimanta Sankaradeva Kalakshetra in Guwahati on January 25, 2011. The museum is dedicated exclusively to music maestro Bhupen Hazarika which will display about 4000 objects owned by the living legend right to his dear chair. The list of items are also being catalogued and readied for the museum?s display which includes all the awards from the Padma Shri to the Dadasaheb Phalke that the maestro has received since he started singing at the age of four. Photo: Ritu Raj Konwar