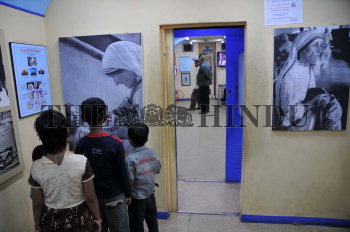 Caption : BHUBANESWAR, 24/01/2011: "MOTHER EXPRESS" TRIBUTE TO A NOBLE SOUL: A view of 'Mother Express', an exhibition train with photographs depicting the life and Yeomen Services of Mother Teresa, which is organised by Indian Railways as a tribute to her Birth Centenary. Visitors going through the photos on Mother Teresa in a special train at Mancheswar Railway station at the outskirts of Bhubaneswar on January 24, 2011. Photo:Ashoke Chakrabarty