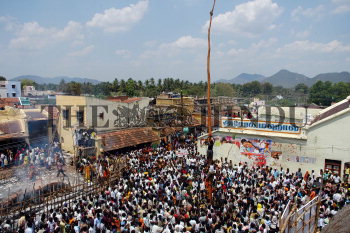 Caption : DINDIGUL, 17/04/2007: Gripping sport: Youths climbing the pole at the temple festival in Natham on April 17, 2007. Thousands of devotees witnessed the 'vazhukku maram' (slippery pole) climbing conducted during the annual festival of Sri Mariamman Temple, at Natham. Residents of Gandhi Nagar in the town prepared the pole for the popular rural sport. A tall tree was cut and the bark peeled off to make the exterior smooth. The pole was polished meticulously and smeared with aloe juice and castor oil. Repeated coating of juice and oil was made to make the pole surface slippery. After a weeklong process, the pole was ready. Photo: G. Karthikeyan