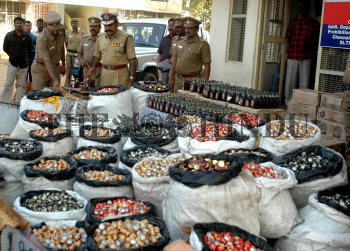 Caption : CHENNAI, 13/01/2011: Chennai Suburban Police Commissioner SR Jangid inspects the seized FAKE caps of liquor bottles on January 13, 2011. A huge quantity of spurious liquor, Indian Made Foreign Liquor smuggled from Puducherry, and FAKE caps of liquor bottles were seized during raids in different locations by personnel of the Prohibition Enforcement Wing of Chennai Suburban Police over the past two days. Photo: A. Muralitharan