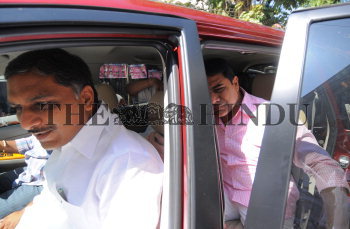 Caption : HYDERABAD, 06/01/2011: TELNANGANA ISSUE: Disappointed TELANGANA Rashtra Samiti legislators led by Harish Rao and K.Rama Rao after Srikrishna Committee report placed before the Union Government recommends six different options on TELANGANA Statehood demand, including keeping the State united with constitutional and statutory measures for empowerment of TELANGANA region, and also bifurcation of the State with TELANGANA and one or the other regions with it. Photo: Mohammed Yousuf