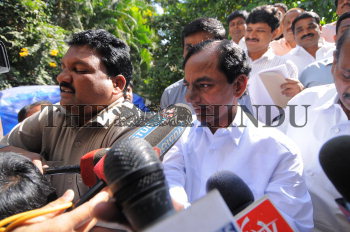 Caption : HYDERABAD, 06/01/2011: TELANGANA ISSUE: Telangana Rashtra Samiti President K. Chandrasekhara Rao disappointed with the Srikrishna Committee report placed before the Union Government with lay out-six different options on January 06, 2010. TRS Chief refused to speak with Journalists who are waiting outside his Banjara Hills residence in Hyderabad. He left for mass demonstration organized by Politically - Joint Action Committee on Telangana to protest on report in Hyderabad on January 06, 2011. Photo:Mohammed Yousuf