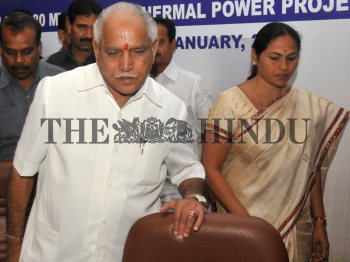 Caption : BANGALORE, 04/01/2011:Chief Minister B.S. Yeddyurappa and Minister for Energy Shobha Karandlaje at the signing MOU between Government of Karnataka and NTPC in Bangalore on January 04, 2011. Photo: V.Sreenivasa Murthy