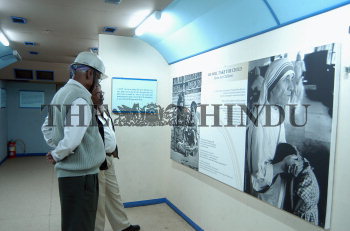 Caption : Bangalore:04/01/2011: The Mother Express, an exhibition train of the Indian Railways to pay tributes to Mother Teresa in connection with her birth centenary, train stationed at Bangalore Cantonment Railway station in on Tuesday.The train showcases the life and works of the Albanian-born Mother, who worked tirelessly in the service of the poor, sick, orphaned and destitute in Kolkata and other places for nearly half a century. The train consists of three air-conditioned coaches with exhibits on the life, work and message of Mother Teresa, including photographs and write-ups. Photo G R N Somashekar.