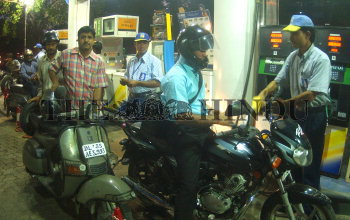 Caption : NEW DELHI,12/04/2007 : In wake of the proposeed nationwide strike called by petrol pump owners on Friday, long queues were seen at all the filling stations in the Capital. The scene at petrol pump in Connaught Place on April 12, 2007. The strike was later called off late in the evening on Thursday. Photo: Sushil Kumar Verma