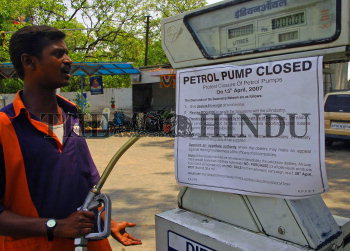 Caption : HYDERABAD, 12/04/2007: A salesman stands next to the notice board flashing Friday's PETROL Pump Closed at a fuel station at Tarnaka in Hyderabad on April 12, 2007. The bandh call given by the Greater Hyderabad PETROL and Diesel Dealers Association is in protest against governments faiurel to solve their demands of five per cent margin on invoice value and other long pending demands. They also threatened to launch an indefinite No-Purchase-No-Sale of all PETROLeum products from Government oil companies from April 28. Photo: Mohammed Yousuf