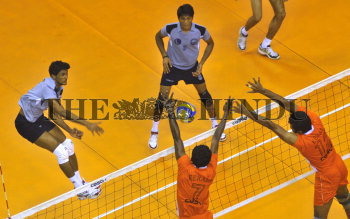 Caption : CHENNAI: 15/12/2010: K.P. Shaheem (left) of Tamil Nadu strikes the ball during the match against Kerala in the 59th Senior National volleyball championship for men at the Jawaharlal Nehru Indoor Stadium in Chennai on December 15, 2010. Photo: S.S. Kumar