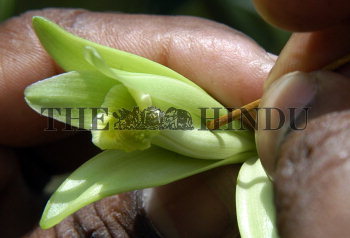 Caption : Vanilla pollination in progress at a farm near Kallar in Keralaās idukki district. High international vanilla production combined with low demand from food manufacturers who prefer synthetic vanillin to natural vanilla has sent wholesale bean prices down to almost 90 per cent from their peak in December 2003. Low prices have pushed up total export of vanilla during April- December of the current fiscal to 98 tonnes from 28 tonnes same period last year. Photo: K.K. Mustafah 11/04/07