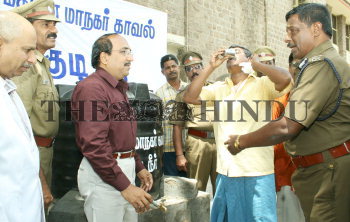 Caption : MADURAI, 10/04/2007 : The Commissioner of Police, A. Subramanian, handing over a 300-litre drinking water tank to benefit public at the Government Rajaji Hospital in Madurai on April 10, 2007. The Collector, S.S. Jawahar, is also seen. Photo: K. Ganesan