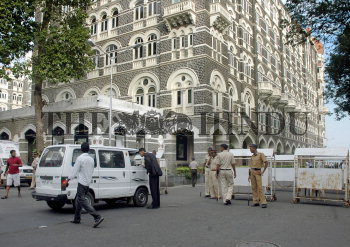 Caption : BL 25-11-2010 MUMBAI: (PHOTO TO GO WITH SHUBHRA?S STORY) Increased road-blocks at the lanes leading to the Taj Mahal Palace Hotel, on the eve of the second anniversary of the 26/11 attacks, inconvenienced regulars in the Colaba area of South Mumbai. The Taj hotel was one of six locations in the city held hostage by the gun-men in 2008. PHOTO: SHASHI ASHIWAL