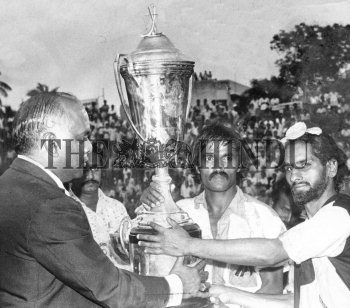 Caption : MADRAS, 27/02/1977: Virender Singh (right) and B.P. Govinda, captains of Railways and Airlines respectively, which were declared joint winners, after the teams played to a draw in both the legs in the final, receiving the Rangaswamy Cup for the National HOCKEY championship, from Mr. M.A.M. Ramaswamy, IHF President, at the Egmore Stadium, Madras on February 27, 1977. The Airlines will keep the trophy for the first six months. Photo: K.N. Chari