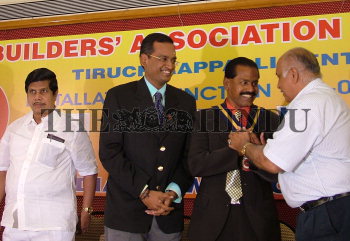 Caption : TIRUCHI, 08/04/2007: S.Ashokan(second from right), the new Chairman of the Tiruchi Chapter of Builders Association of India, being congratulated by A.K.Yousuf, former national Vice-President of BAI, at a ceremony on April 08, 2007. The Vice-Chairman of the State Planning Commission M.Naganathan (left) and L.Nagappan (second from left, outgoing chairman, are also seen. Photo: R. M. Rajarathinam